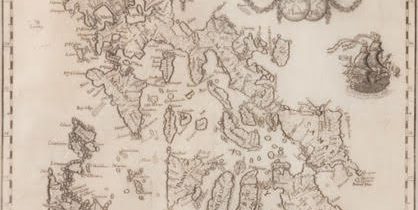 Alerted by friends in Europe, I immediately sought out a dozen alumni willing to contribute P50,000 each to place a bid for the map. Unfortunately Mt. Pinatubo had erupted at the time and its lahar kept flooding Central Luzon. So I incurred the ire of an historian who scolded me for initiating such a project.

His tirade dwelt on the vanity of collectors and their apathy to the suffering of their fellow human beings during a national disaster.

His simplistic argument sounded like that of Judas who questioned Mary Magdalene’s “frivolous” act of pouring on Christ’s head the perfume which could have been sold and its proceeds given to the poor. The presupposition here seems that for as long as the poor and hungry are around, one should not indulge in the “guilty pleasure” of buying artworks and cultural artifacts.

But then, do human beings live by bread alone? Beyond material needs like food and housing, human beings desire meaning. Culture and art are not “luxuries” but are essential to being human, for they bestow us with meaning and a sense of self-esteem.

Culture, taken here in the broadest sense, refers to any human experience insofar as it leaves traces. It covers human works on the technical, social, economic, political, intellectual, moral and artistic levels.

These human achievements are expressed in the forms of tools, documents, monuments, actions like rituals, and works of art. To quote Hegel, these constitute “the very substance of the life of a people.” These reveal that layer of images and symbols comprising the basic ideals of a people.

It will also come as a bigger surprise that for 30 years now, a copy of the 1734 Murillo Velarde map has been in Malacañan Palace, according to a reliable source! It is strange then that no one in the national government took notice of this until Velasco Velarde’s heroic act of winning the bid and generous gesture of donating the coveted map to the National Museum.

The “truth dissemination” planned by this Ateneo alumnus could have started earlier. To quote him: “[E]very Chinese child since 1935 was taught in school that these contested islands were owned by China for centuries… We must match the indoctrination, propaganda and brainwashing of their youth with our own truth seeking and truth dissemination among our youth. A P12-million map without the accompanying follow-through programs would make that map a mere wallpaper!”

Velasco Velarde may have imparted an important lesson to collectors—that one never collects for oneself alone but for generations to come. He reminds them that artworks and cultural artifacts are not only viable as economic investments for self-gain. They are also powerful vessels for promoting esteem of one’s heritage, pride of one’s country and dedication to one’s people.

A “noble-minded” collector differs from a “hoarder,” The true collector is ever mindful that he lives in time and in the world with and for others. She is constantly aware of the intimate intertwining of the spiritual and the material—that matter is the necessary slope of the spirit. To care for the material is to assure the growth of the spiritual.

In 1733, King Philip V of Spain ordered Governor General Fernando Valdés Tamón to prepare a map of the Philippines. Governor General Valdés immediately entrusted the task to Fr. Pedro Murillo Velarde, a Jesuit professor of canon law at the Colegio de San Ignacio in Manila. According to Carlos Quirino’s book “Philippine Cartography,” Fr. Murillo Velarde was acknowledged as “the authority on maps and the best chronicles that had appeared in the archipelago.”

Considered by the Biblioteca Nacional de España in Madrid as the “first and most important scientific map of the Philippines,” the 1734 Murillo Velarde is also a large map measuring 27 inches x 42 inches. In the first volume of his “Chronicas,” published in Manila from 1738 to 1744, the Franciscan Juan de San Antonio credited Murillo Velarde as having “placed all the towns, points, coves, ports, shoals, reefs, routes, courses, rivers, forts and distances, as was possible in so difficult a matter and within the scale. And in a description of a few lines … related the most memorable [events] therein, the most extensive possible under such a minimum of words and figures.”

Murillo Velarde’s map is regarded by former Education and Culture Minister Jaime C. Laya as “the culmination of two centuries of mapmaking” and as “the Holy Grail of Philippine cartography.” For the Jesuit historian José S. Arcilla, the map also served as a sea chart aimed at guiding ship captains to “navigate the narrow inter-island seas of the Philippines, for which waterways and harbors were clearly marked.” That is why the map includes compass roses from which radiates a network of lines on which sea pilots plotted their courses. This also explains the drawings of Moro sailboats (vintas), Chinese junks (champan), Spanish galleons and other types of sailing craft.

On the medallion in the southwestern part of the map, there is a capsule history of the Philippines: Magellan’s arrival in Cebu, his being slain (by Lapu-Lapu) in Mactan, the founding of Manila by Miguel Lopez de Legazpi on June 24, 1571, the products cultivated, the flora and fauna, and the missionary work undertaken by the different religious orders.

Having a high regard for the talent of the Indios (Filipinos) in the arts and crafts, Murillo Velarde asked the artist Francisco Suarez and the engraver-printer Nicolas de la Cruz Bagay to collaborate on 12 panels showing scenes from daily life in early 18th-century Philippines, and the local flora, fauna and landscape.

Murillo Velarde expressed his admiration in his “Geographia historica de las Islas Philipinas,” published in Madrid in 1752: “The Filipinos are extremely capable in any handicraft— there are excellent embroiderers, painters, silversmiths and engravers whose work has no equal in all the Indies, and could be considered elegant in Paris and Rome. I have seen paintings, drawings and maps from pens more beautiful, neater and handsomer than those taken from Paris.”

The 12 panels consist of four separate parts which are pasted at the sides. Each part is made of three frames (9 in wide and 7 in high). An interesting aspect to note is the cosmopolitan population of early 18th-century Philippines. Father Murillo recounts in his “Historia de la provincia de Philipinas de la compañia de Jesus” that by standing on the bridge across the Pasig River, one could see representatives of “all the nations of Europe, Asia, America and Africa passing by.”

In a first frame on the left side of the map, there are sangleyes or Chinese residents (a long-haired and bearded Christian convert, a trader with a fan, a fisherman (pescador) wearing a raincoat of palm leaves and a laborer with his carrying pole (cargador con pinga); the last three with their hair in pigtails. Below this, a frame shows a group of four half-naked kaffirs (cafres) from Africa. Three of them, with a string of small bells around their ankles, dance while a Canarin (a native of Canara, an ancient kingdom near Mangalore) and a lascar or Indian sailor look on. In a third frame, there is a family of mestizos (of mixed Spanish and Filipino blood); the man dons a hat and long cape over bloomers; the woman wears a saya (a long wide skirt) and a tambourine necklace.

In the same frame, there is a Mardican (or native of Ternate in the Moluccas) with a sword, spear and shield. After the Spanish forces withdrew from the Moluccas in 1662, the Christian Mardicans in the Moluccas migrated to a town in Cavite which they also named “Ternate.” A Japanese with a shaved head and a sword stands beside the Mardican.

In the first frame on the right side of the map, there is a Spanish official, dressed in the Louis XV style, a flared coat, lace cuffs and wig. He is protected from the heat of the tropical sun by his servant who holds a high parasol behind him. A negro criollo (Philippine-born Spaniard described as dark-skinned but not as dark as the Indios) is respectfully listening to the Spanish official. Behind them, two Indios indulge in the favorite local sport of cockfighting.

Farther behind them are two Aetas, with bow and arrow. In the next frame, a seated Armenian (or Persian) smokes a water pipe in front of a Mogol (with a beard and a turban) and a native of Malabar (with turban and earrings) from Goa and India’s west coast.

In a third frame, there is a street scene with a couple—a barefoot Indio, with a black cloth (lambon) on his arm, and a veiled India or native woman, with a scapular around her neck—on their way to church.

Facing them are a female vendor selling a basket of guavas held on top of her head; and two boys, one in a loincloth and holding a crab, the other naked, carrying a piece of bamboo containing either vinegar or milk. Besides the two boys, a Bisaya stands with a balarao (a regional knife). In the distance, a couple is going through the movements of the comintang, an ancient Filipino dance, to the music of a man playing a mandolin.

There is also a frame with a rural scene: a man on a ladder cutting some bamboo from a grove (with the observation that bamboo is used in building houses), a farmer riding on a carabao, a boy holding a huge bat with a head resembling that of a dog, a man being transported in a hammock and an albino monkey. In the same frame, monkeys climb a coconut tree whose sap is made into a drink (tuba). In the background, we see papaya and jackfruit (nanca) trees; also an areca nut palm tree (bonga), from which betel nut (buyo) is derived and which is chewed by the locals.

There is still another frame with a rural scene: a farmer urging his carabao to help him plow a field, another farmer with a wooden sled pulled by a carabao, a woman pounding with a pestle rice in a wooden mortar (lusong) before a nipa hut (bahay kubo). For fauna, there is a crocodile, baring its sharp teeth, a boa constrictor with its tail strangling a pig and a white crow (puting uwak) in the sky. Four frames are devoted to Intramuros, the fort of Zamboanga, the fort of Cavite and the island of Guam (Guajan).

“Panacot” or “Scarborough Shoal” does not appear in any of the ancient Chinese maps.

The 1734, 1744 and 1760 Murillo Velarde maps clearly show Panacot, the island disputed by China, even before it became known as “Scarborough Shoal.”

In fact, as Supreme Court Associate Justice Antonio T. Carpio wrote in his monograph “Historical Facts, Historical Lies and Historical Rights in the West Philippine Sea” and has repeatedly stressed in his lectures on the territorial dispute between the Philippines and China, Panacot has been “consistently depicted in ancient Philippine maps from 1636 to 1940.”

Only after Sept. 12, 1784, when an East India Co. tea-clipper was wrecked on one of its rocks did the shoal become “Scarborough Shoal.” For Carpio Panacot or Scarborough Shoal “does not appear in any of the ancient Chinese maps.”

Leovino Ma. Garcia is former dean of the humanities of Ateneo de Manila University. He teaches philosophy at the University of Santo Tomas Graduate School.