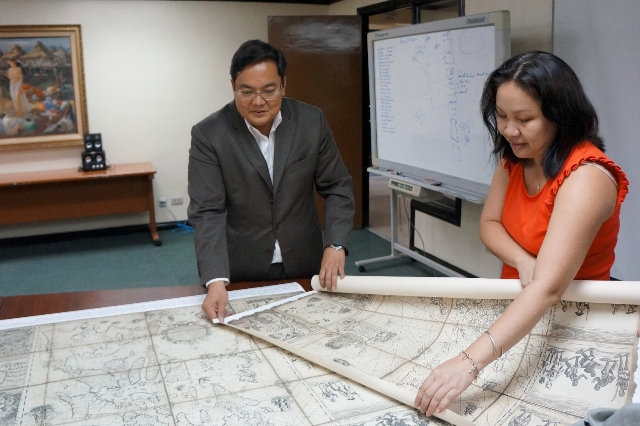 MANILA, Philippines — The Philippine government will be submitting to the United Nations Tribunal on the Law of the Sea in The Hague this week an almost 300-year-old map of the Philippines showing the disputed Scarborough Shoal being part of Philippine territory as far back as three centuries ago. 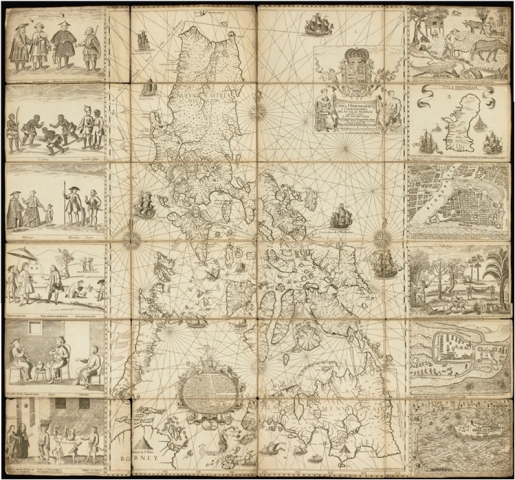 The first certified true copy of the map has been reserved for Malacañang. Velarde will personally present it to President Aquino on June 12, the anniversary of Philippine independence.

How Velarde, president and chief executive officer of Information Technology-based Now Corporation, acquired the map that had lain among the treasures of one of England’s most prominent families for more than 200 years is like something out of the movies. In fact, the wizard Harry Potter even makes a cameo appearance in the story.

Velarde has yet to find out if he is related to the Jesuit priest, although a possible connection was one of the motives for his pursuit of the artifact.

Carpio, who has been conducting lectures debunking China’s claim of almost the entire South China Sea, calls the Murillo Velarde map the “Mother of all Philippine maps.”

Local public and private museums declined to take part in the Sotheby’s bid. The National Museum was interested but didn’t have the money, so the plan was for Velarde to buy the map and sell it later to the National Museum.

The Murillo Velarde map measures 1,120 by 1,200 mm. The Sotheby’s catalog carried a description of the map by Filipino historian and biographer Carlos Quirino: “Murillo Velarde’s map of the Philippines is a landmark in the depiction of the islands, and the first scientific map of the Philippines. It is flanked by two pasted-on side-panels with twelve engravings, eight depicting native costumed figures, a map of Guajam (Guam) and three city or harbour maps, notably Manila.”

The map was among 80 heirlooms that the current Duke of Northumberland, Ralph George Algernon Percy, decided to auction off after a devastating flood hit Northumberland County in April 2012.

Newspaper reports said heavy rains had “caused a culvert on the Duke of Northumberland’s land to collapse. Many residents were evacuated and some homes demolished after the foundations were damaged.”

Although the Duke’s estate did not own all the affected homes, he provided urgent help for his neighbors. The flood left him with a £12 million bill for repairs, hence the need to auction off his family’s collection.

As a bit of trivia, the Duke owns the vast Alnwick Castle, which has been featured as Hogwarts School of Witchcraft and Wizardry in the first two Harry Potter films. 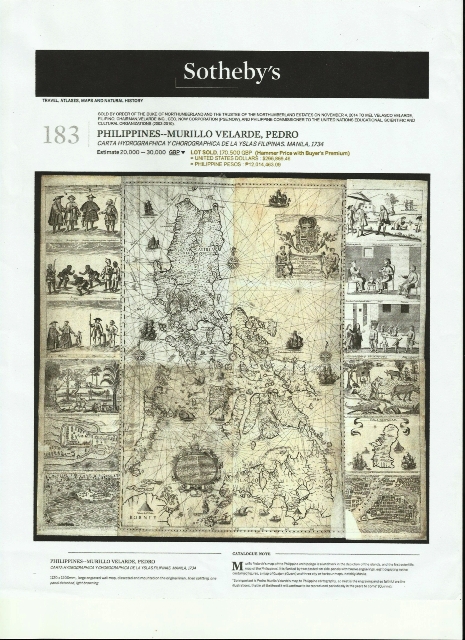 The Murillo Velarde map as it appears in a Sotheby’s flyer.

It was in the November auction that the Murillo Velarde map, called Carta Hydrographia y chorogphica de las Ylas Filipinas, Manila 1734, was included under Lot 183.

The Murillo Velarde map names two Filipinos as responsible for the map—Francisco Suarez who drew it and Nicolas de la Cruz Bagay who engraved it.

Historian Ambeth Ocampo wrote, “The Murillo Velarde map of 1734 is quite rare, with less than 50 known copies to exist in the entire universe.”

Velarde registered to participate in the auction through an agent.  He had participated in auctions in person before but his acquisition of the map last November was his first bid by phone.

The Sotheby’s auction took place at 9 p.m, Manila time while Velarde was in a Resorts World steakhouse for his mother’s 78th birthday dinner.

Velarde described the bidding, which lasted only for three to four minutes, as “furious.”

He was on the phone before Sotheby’s put Lot 183 on the auction block, and noted that in other lots, it was over after two to three bids.

When the bidding reached £80,000, Velarde said he paused for a few seconds to decide whether or not to stop. The exchange rate was P68 to £1. He knew that the National Museum could allot only P5 million to buy rare items.

Then images of the Chinese occupying the contested islands in the Spratlys came to mind, he said, and he decided to proceed.

“Pansariling away na, nagiging personal na sa akin (lt became a personal crusade),” he said. He eventually paid more than double the amount he thought he was willing to part with: £170,500.

When you buy a car, Velarde said, you have something to compare it with. Not in the case of an old map. But Velarde also thought of the possible implications later, knowing that there is a pending case before the UN International Tribunal on the Law of the Sea against China. “You need some evidence,” he said. “There’s a bully in the neighborhood. He already took over our land,” businessman Mel Velarde says, referring to China. VERA Files/Yvonne Chua

Velarde said he is thankful the auction was not held in Shanghai or Macau, where the map could have attracted Chinese bidders and the price would have been much higher.

Now that Velarde owns the map, the National Museum has informed him it has no funds to buy the map this year, and that there was some uncertainty about funds next year. Velarde decided to donate the map instead.

Why is he doing it?

“In a true-to-life movie, there’s a part for everybody. There’s a bully in the neighborhood. He already took over our land. We have soldiers in the Spratlys. Naka-standby lang sila (They’re just on standby there),” Velarde said.

“Then, this map is owned by a Duke in a Harry Potter castle. It’s like you wanting to play your part in the movie,” he added.

Velarde said he hopes to meet with the Duke of Northumberland someday.  His children want to come along, not really for the Duke, who comes from a 700-year-old English aristocracy and is the fourth largest landowner in the United Kingdom. They are excited to see the room where Harry Potter had his first flying lessons.

VERA Files is put out by veteran journalists taking a deeper look at current issues. Vera is Latin for “true.”